Off to New Adventures!

Getting ready to head off to Dubai, United Arab Emirates. I will be staffing a booth at the Arab Health Conference MedLab section of the exhibits. I hope all goes well, both in travels and with getting the exhibition materials ready. I'm supposed to be getting the stuff by Sunday to set up the booth. The weekend in the UAE is actually Friday and Saturday, so Sunday is a work day. Interestingly, St. Mary's, the Roman Catholic church there has a full schedule of services Friday, Saturday, and Sunday. The ones on Friday seem to be in a variety of Middle Eastern languages, but the ones on Sat. and Sun. are mainly in English. So, I'm going to try to get to the 9am Mass on Sunday if possible. I arrive in Dubai on Sat. evening at around 7pm. So, getting to church will be my first adventure and then I'll head over to the Convention Center.

On the bike racing front, the Tour Down Under is underway in Adelaide, Australia. It is Lance Armstrong's first race back. He is racing for the Astana team. He is doing pretty good...able to keep up with the other pros and he's not even the oldest racer in the peloton. Jens Voigt (Saxo Bank) is one day older than him! He was in a break with the other major players the other day and it was nice to see. He is doing double duty besides, he has a whole host of Livestrong (Lance Armstrong Foundation) events that he's been attending besides just racing. I don't know how he does it. Of course, he's also in demand at the start line for autographs, etc. I think he's going to have to stretch it out some at other events otherwise he'll burn out before the Giro (Tour of Italy), much less the Tour de France in July. I think this pace is primarily because of the limited time he has in Australia and they are launching a whole lot of new initiatives and partnering with a lot of cancer organizations there. That was part of his reason for coming back to racing. It gets him a lot more publicity if he is an active racer and he can piggyback his activities with Livestrong onto an already very popular event, like the Tour Down Under.

Next month, he'll be in the Tour of California. That should be something to see. Carlos Sastre (Cervelo Test Team), last year's TDF winner will be there as will Ivan Basso (Liquigas), who is coming off his suspension for "attempting" to dope (long story...). Ivan had been one of Lance's main rivals the last couple of TDF's that he raced. Going to be a great season!

Well enough rambling for now...I'll try to update from Dubai. I think I should be able to because I should have internet in the hotel. This is a new one, it just opened in October 2008.
Posted by Connie at 12:09 PM No comments:

Well, this weekend was good and bad. Good - arrived in NJ before snow; Nice dinner; Good acoustics; excellent soloist; excellent desert; dry drive home. Bad - Cold during walking; something went wrong with organ or conductor (organ so promising during 2nd movement was a bust during 4th); Neil fell in icy conditions on Sunday coming back from church; spilled coffee during fall and injured ribs but they seem to be getting better.

Overall, it was a good weekend. Nice concert, though the Saint Saens was disappointing. Nice drive, good time just being together.

Busy, busy, busy at work. Getting ready for my trip to Dubai and Mumbai. Plus a million other things on tap that need to be taken care of before I go.

That's all for now!
Posted by Connie at 5:47 PM No comments:

Rod's party on Sunday was great! I had a lot of great conversations and too much wine, but all was well since Neil was driving. I was at my desk at 7am the next morning, not too much the worse for wear.

This has been a busy week at work...mid-year personnel evals are due, so I'm working on those. My program has applied to the College of American Pathologists for approval, and we've received questions from them, so I'm working on a response and there are just a whole host of administrative issues that need to be handled this week related to the new year. I've got to find some time to go over things related to my Dubai/India trip.

Bryan talked to me via Instant Message today. He isn't doing so well. He spent part of the day at the ER. He's got a case of gastroenteritis. The docs fixed him up, but he still isn't feeling back to normal, but he's got drugs to manage the symptoms. He's seeing his regular doc on Friday. Hopefully all will be well.

I had choir practice tonight. A lot of new (old - we recycle from past years) pieces to work on. Easter is coming soon...sooner than we'd like, but the older pieces seem to be shaping up nicely. Like riding a bicycle...

I've started following a new exercise regimen I found in a magazine...its "guaranteed" for you to lose 1 lb. per week without changing your diet if you do this 20 min. routine 3 times per week. I don't believe it, but I'm giving it a chance...I'm going to give it at least 3 weeks. Its on the treadmill, so I'm not overenthused, but if it works...

That's it for "this and that."

Posted by Connie at 6:50 PM No comments: 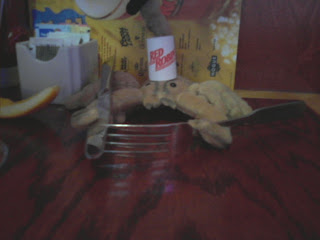 Had an EXCELLENT time with Bryan and Jenn (son and daughter-in-law). Absolutely loved playing a board game. We hadn't ever done that while Bryan was in high school, but really liked interacting like that together. Because we've always have been a very quiet family, it has been nice to sit and each do our own thing on laptops and just enjoy each other's company without talking, but that apparently isn't what Jenn's family is used to. But it is good for us to get used to more interactive things and we really did enjoy the experience (even Neil!). Even though we stll enjoy just being together in the same room its nice to enjoy stretching our horizons. I hope they will come back and visit soon. We're really not so bad or anti-social...just boring.

Bryan sent an OUTSTANDING picture of the scorpion (stuffed) we gave him for Christmas at a "Red Robin" restaurant that they met Jenn's college roommate at. It was so cute!!! I've save it and will put it iinto the rotation for my desktop picture. So cuuuute....

On to tomorrow...Sunday in Northern Virginia...I'm singing in choir at 10:30am and then cantoring at 12:30pm. That will be good as the cantor solo is something I've always wanted to sing as a solo. Rod Sterling, the Twilight Man, will be hosting an excellent choir party on Sunday evening. We're really looking forward to that. I do still feel bad that he is still being the DJ for PVI's RunFest each September (which I intially got him into) even though Bryan has long graduated and I'm not involved. But he's still having fun and hopefully getting some business out of it. Great job, Rod!!

That's it for now!

Posted by Connie at 3:09 PM No comments: